Thank you so much for visiting our family website where we are sharing the story of our son Thomas, who was diagnosed with neuroblastoma cancer one month before his fifth birthday. We are using this website to keep family, friends, and well-wishers updated in one place. We appreciate your prayers and words of hope and encouragement.


Thursday June 4, 2020: We took Thomas to our family doctor, having found a lump in the upper right quadrant of his belly within the prior five days. Blood labs were drawn and an ultrasound was scheduled for the end of the day and by evening, we were informed that Thomas had an 11-centimeter tumor. He was given a diagnosis of cancer (although incorrectly of the easier-to-treat Wilm's tumor of the kidney).


Friday June 5:  We met with our oncologist for the first time and a urine test was done.


Monday June 8: Thomas had a CT scan and we were informed the same-day that this was not a Wilm's tumor but was a neuroblastoma on Thomas's adrenal gland.

Saturday June 13: Thomas had his COVID-19 test, required under current restrictions in order to have any surgical procedures. Negative!

Monday June 15: Meeting with the surgical team for consultation.

Tuesday June 16 (Surgery #1): Thomas had an open biopsy of his neuroblastoma tumor and a port placed in his chest.

Tuesday June 30: Thomas's laboratory results are back and he is diagnosed as having Stage 3/Intermediate Risk GanglioNeuroblastoma.

July 23-August 12, 2020: Chemotherapy Cycle #2
August 14: MIBG and CT scans to check the progress of two rounds of chemotherapy revealed that Thomas's tumor had not shrunk in measurements at all, although some of the tumor is dying. The portion of the tumor encasing the four abdominal arteries is still very much alive and that is the part absolutely necessary to die.
Aug. 17-Sept. 6: Chemotherapy Cycle #3. Thomas is having increasingly strong allergic reactions to an unknown substance during chemotherapy infusion days, as described here.
Sept. 10-30: Chemotherapy Cycle #4
September 24: MIBG and CT scans scheduled to check the progress of Thomas's tumor. The results are that Thomas's tumor has not shrunk or died in a meaningful way.
Oct. 5-25: Chemotherapy Cycle #5 (new meds, higher doses)
Oct. 26-Nov. 15: Anticipated Chemotherapy Cycle #6
Nov. 12: MIBG and CT Angiogram scans to check the progress of Thomas's tumor revealed that Thomas's tumor shrunk 5-10%.
Nov. 18 (Surgery #2): Thomas was anticipating a tumor debulking surgery (4-6 hours), but underwent an unexpected Total Gross Resection lasting 12 hours  which removed the 390-gram tumor (13.4 x 9.8 x 7.7 cm).
Experienced SIRS response and retained 6 liters of fluid (= 16 lbs of fluid)
Nov. 26 early morning: Gastric bleeding began, which would turn out to be severe gastritis
Nov. 26-30: Thomas extubated and awake
Nov. 29: Continuing severe gastritis became a bleeding crisis in which he vomited frank blood for two hours and lost 250 mL in that time
Nov. 30: Thomas was reintubated and left sedated. Endoscopy confirmed severe gastritis, two ulcers, and a massive blood clot taking up half of his stomach.
Dec. 4 (Surgery #3): Thomas experienced internal bleeding and was taken for emergency surgery at 2:00 a.m. It was discovered that his organs had experienced complete necrosis, such that the surgeon had to remove his stomach (90%), pancreas (nearly half), and spleen (100%), with plans to go back and remove his necrotic gallbladder. Thomas was left open with a WoundVac.
Dec. 5 (Surgery #4): Thomas went for a planned surgery, during which a bit more necrotic pancreas was removed and it was found that his bile duct will need reconstruction. The gallbladder was left in place. Thomas was left open with a WoundVac.
Dec. 5 (Surgery #5): Thomas went in for emergency surgery a couple of hours later to stop internal bleeding. Thomas was left open with a WoundVac.
Dec. 7 (Surgery #6): Surgery to reconstruct Thomas's gastrointestinal organs was successful. His necrotic gallbladder was completely removed and ducts reconstructed from the liver and remaining portion of pancreas to connect to the GI track. Thomas's intestinal track was connected to his esophagus to act as a stomach (although not a pouch). Thomas was left open with a WoundVac.
Dec. 9 (Surgery #7): Thomas had surgery to install a PermaCath (to receive intermittent dialysis) and a J-Tube. Thomas was left open with a WoundVac.
Dec. 10: Thomas has been developing coagulopathy for some time, which is a result of undergoing so many surgeries in rapid succession. His body requires far more coagulation factors than his body can produce. Tests reveal that his bone marrow is producing baby blood cells appropriately, although his liver is not at full functioning yet: either way, his body's need far exceeds what a healthy body could produce. They are treating this mainly by transfusions of fresh frozen plasma, packed red blood cells, platelets, and cryo.
Dec. 11 (Surgery #8): Thomas went to surgery a little earlier than planned in order to investigate some bleeding resulting from coagulopathy. The surgeon re-opened the closed fascia to stop bleeding. He re-closed the fascial layer as well as finally closing the skin layer. Thomas still has a WoundVac (being called a SkinVac because it is on top, not inside).
Dec. 12 (Surgery #9): Thomas was given a stat CT Angiogram and bleeding was discovered. He went into emergency surgery overnight to stop bleeding posterior to the duodenum. Thomas was left open with a WoundVac.
Dec. 15 (Surgery #10): Thomas had a planned surgery and, when opened, no bleeding was discovered (a first for him). His fascia and skin layers were closed.
Dec. 19: Thomas was extubated successfully! (Remained extubated for 7 days)
Dec. 25 Christmas: Thomas began smiling for the first time!
Dec. 26 (Surgery #11): Thomas began bleeding out from two vessels behind his pancreas and had an emergency CT Angiogram and surgery, and was reintubated. (He was extubated for the third time on Dec. 28.)
Dec. 31 New Year's Eve (Surgery #12): Thomas became unstable because of pocket(s) of infected fluid in his peritoneal cavity, which caused a SIRS response and the development of pleural effusions. A priest gave him Anointing of the Sick. In an overnight emergency, he had two chest tubes and a new abdominal drain placed.
Jan. 10: Fifty-four days after his primary surgery, Thomas finally had his abdominal incision staples removed.
Jan. 20: After 63 days, Thomas graduated off the PICU floor and onto the Oncology floor.
Jan. 31-Feb. 1: Thomas experienced significant bleeding into his JP drain and in his GI tract, resulting in transfusion and emergency CT scan.
Feb. 12: Thomas's end-of-treatment MIBG scans three months after his last chemotherapy showed No Evidence of Disease.
Feb. 16: After 28 days on the Oncology floor, Thomas was transferred to the Rehab floor.
March 3: After 15 days at In-Patient Rehab, Thomas was not medically stable enough to be discharged so was transferred back to the Oncology Floor.
March 19 (Surgery #13): Thomas underwent surgery for what was thought on imaging to be a bowel stricture requiring bowel resection surgery, but turned out to be adhesions attaching Thomas's left splenic flexure to his liver, narrowing his bowel like a garden hose folded in half. The adhesions were released.
March 29: After 132 days in the hospital, Thomas was discharged home!
April 6: Thomas graduated off of TPN and was receiving nutrition only via J tube and by mouth.
May 1: After five and a half months, Thomas learned to walk independently!
His last blood transfusion was on February 1, 2021, at which point his total transfusions of blood products received was 93 units, although most of those were given in a one-month period. 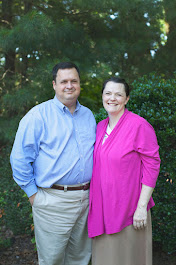 Hi, I'm Katherine! Having followed the circuitous path from the New Age to embracing the Roman Catholic faith, from cutting-edge California to the old-fashioned South, from attending law school to teaching our home school of six children, here I find myself, just trying to figure out how to live a traditional Catholic lifestyle in this modern world. Now childhood cancer has become part of our childhood story, too. Please stop in and read for a while--and please say a prayer for us! 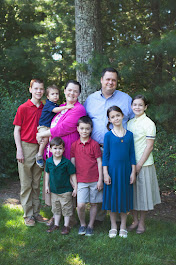 “It is most laudable in a married woman to be devout, but she must never forget that she is a housewife. And sometimes she must leave God at the altar to find Him in her housekeeping.”
--St. Frances of Rome
"To be Queen Elizabeth within a definite area, deciding sales, banquets, labors and holidays; to be Whiteley within a certain area, providing toys, boots, sheet cakes, and books, to be Aristotle within a certain area, teaching morals, manners, theology, and hygiene; I can understand how this might exhaust the mind, but I cannot imagine how it could narrow it. How can it be a large career to tell other people’s children about the Rule of Three, and a small career to tell one’s own children about the universe? How can it be broad to be the same thing to everyone, and narrow to be everything to someone? No; a woman’s function is laborious, but because it is gigantic, not because it is minute. I will pity Mrs. Jones for the hugeness of her task; I will never pity her for its smallness."
-- G.K. Chesterton
"The great thing is, if one can, to stop regarding all the unpleasant things as interruptions in one's 'own' or 'real' life. The truth is, of course, that what one regards as interruptions are precisely one's life--the life God is sending one day by day: what one calls one’s ‘real life’ is a phantom of one’s own imagination."
--C.S. Lewis